PARENTS of a five-year-old boy who died of brain cancer have managed to raise more than £150,000 through the charity they started themselves. 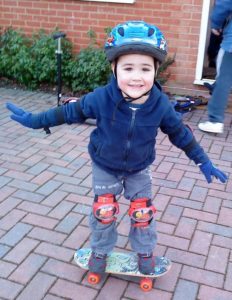 Ollie Young first complained of dizziness and losing his balance to his parents Sarah and Simon, Wokingham residents, when he was just five years old. Despite at first thinking he was just being playing a practical joke, they soon took him to hospital when they noticed something wasn’t right.

Sarah Simpson, Ollie’s mum, said: “Ollie was very happy and lovable, and such a cheeky little chappy. You never knew when to believe him because he was always playing practical jokes, so when he started walking a bit to the side and saying he felt dizzy, we weren’t sure if he was just playing around.

“When the doctors first told us Ollie had a brain tumour, I thought ‘okay, we can manage this, there will be treatments for him’ – and then we got told that he had a grade 4 glioblastoma, and he’d be lucky if he had two weeks to live. 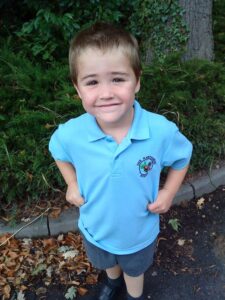 “And I think that was when it really hit home. At that point, they also said there was nothing more they could do.”

A biopsy confirmed that the tumour was a grade 4 glioblastoma – a form of brain cancer in children for which no targeted drug treatments are available. The position of the tumour meant that it would be inoperable, and his parents were informed that he would be lucky to survive for two weeks.

Ollie moved straight into a local hospice, where he and his family spent the next 12 weeks together, before he very sadly died in 2012, one day before his sixth birthday.

Since Ollie’s death, his family and friends worked together to start the Ollie Young Foundation to fund research into glioblastoma as well as to raise money for cancer support services, such as Helen and Douglas House hospice.

The foundation has now agreed to pledge a total of £170,000 to the Institute of Cancer Research, London, to support their work.

Ms Simpson added: “We set up the Foundation after Ollie’s death because I thought something has to be done – if someone could have been doing something years ago, then maybe we wouldn’t have been in this position.

“The enthusiasm of the team at The Institute of Cancer Research is exactly what we want to support. We can see their research developing, and we’d really like to be a part of that.

“I’ve got a lot of faith in our project going forward. I think the future’s bright, but I also think it’s really important that we don’t stop trying to raise money or awareness.

“Our local area of Wokingham have been absolutely amazing and behind us 100 per cent, and it means a lot that everyone is so supportive of us.

“I hope that people will continue to be generous to help us make sure that no other families have to go through what ours has.”

Dr Yura Grabovska, Bioinformatics Officer at The Institute of Cancer Research, said: “Ollie was clearly a very caring and popular boy, and I feel honoured to be working in his name. I am truly grateful to the Ollie Young Foundation for their generous support of my research.

“I find it extremely motivating that the Glioma Team’s research is working towards better outcomes for children like Ollie – and bringing hope to their families – and I’m going to work extremely hard to make sure that every penny raised by the Foundation helps to create a brighter future for other children with cancer.”