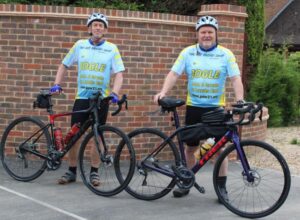 TWO PENSIONERS from Newport will take on a mammoth cycling challenge to support brain tumour research.

Alan Francis and Dale Thomas, both 61, are set to cycle nearly 1,000 miles from John O’Groats to Lands’ End.

The pair have been friends since attending Durham Road Infants School in 1963, and have so far raised more than £4,300 for the Ollie Young Foundation.

Mr Thomas, who recently retired from the software industry, now lives in Wokingham. He was diagnosed with prostate cancer last year and was given the all-clear later in 2020.

Having run several ultra-marathons previously, he then suggested the challenge to Mr Francis – a former firefighter – and they have been training for it since February.

“I do a little bit of cycling while Dale does more running,” said Mr Francis. “Since his cancer treatment last year, he’s been told not to run as much so he wanted to cycle. So he contacted me about it.

“I started training in earnest in about February. We’re doing about 100 miles a week now.

“The longest I have done is about an 80-mile cycle from Cardiff to Tenby. This is day after day after day which we are preparing for now, but we’re confident we can do it.

“We hope to cycle for 16 days averaging about 70 miles a day. We have got a motorhome and we have roped in friends and family and volunteers to drive a bit along the way.” 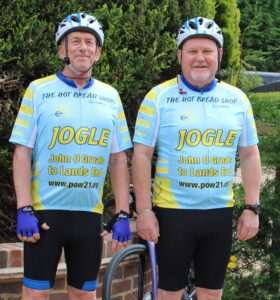 Alan Francis and Dale Thomas will be cycling from John O’Groats to Lands’ End. Picture: Alan Francis.
The Ollie Young Foundation was set up after the death of Ollie Young a day before his sixth birthday ,and 12 weeks after being diagnosed with an incurable brain tumour.

The foundation funds research into Paediatric Brain Tumour and has no paid fundraisers and no chief executives meaning that every penny raised goes straight to research.

“It’s a charity based in Wokingham that Dale has worked with before,” said Mr Francis.

“We have got 13 grandchildren of our own. It brings it home to us, we’ve got healthy grandchildren luckily, but it could have happened to anyone.”

They will set off on Monday, June 21.

You can find out more about the challenge at pow21.org and you can donate at Just Giving.