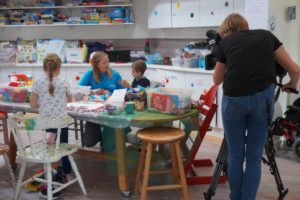 A BEREAVED mother who made ‘special memories’ at an Oxford hospice is in the running for the Pride of Britain Awards.

Sarah Simpson has made it through to the regional final of ITV Meridian’s Fundraiser of the Year Award, which is part of the national awards, for her work at the Ollie Young Foundation.

She set up the charity in memory of her son Ollie, to support three causes including Helen & Douglas House.

The youngster was cared for at the East Oxford children’s hospice in 2012, and died one day before his sixth birthday.

It came just one week after he was diagnosed with an incurable brain tumour.

Ms Simpson, from Wokingham, said: “We had never been in a hospice nor had we heard of Helen & Douglas House before, but the minute we got inside, it was like our second home.

“Even knowing that Ollie was very poorly, the staff made sure that he was being Ollie – they got to know his real cheeky side and were won over with his charm within hours.”

She said despite Ollie’s physical limitations, ‘nothing was impossible’ with the help of determined staff.

Ms Simpson added: “Without Helen & Douglas House, Ollie wouldn’t have got to live out the last of his journey to his fullest, with tonnes of smiles along the way.

“Among the sadness we have made some of the most special memories, that will live with us forever.”

Ms Simpson set up the foundation to help other families in her situation, and it has since raised £36,000 for Helen & Douglas House.

She was filmed at the hospice for a programme that will air on ITV Meridian tonight, following her story.

The regional winner of the award will be announced on Friday, and will go on to represent ITV Meridian at the Daily Mirror Pride of Britain Awards in London in October.Michaela Middleton from Bicester also took part in the filming with her 10-year-old son Finley and Lucie, who also receive care at the hospice.

She described the hospice as ‘a sanctuary in a world of chaos’ and said her children ‘adore’ the staff and facilities.

She said: “Finley and Lucie loved making signs to wish Sarah luck for her nomination for Pride of Britain.

“Sarah is an amazing lady who rose from the ashes of grief to give unreservedly to others.

“For us as a family, along with many other families who use Helen & Douglas House, we all appreciate everything that Sarah has given and continues to give.”

Clare Periton, the hospice’s chief executive, said: “Sarah is an amazing woman who has been through a very traumatic time losing her son, which sadly so many of our parents go through.

“We wish Sarah the very best of luck this week and everyone at Helen & Douglas House hopes she will get through to the national finals on Friday.”

The programme will air from 6pm tonight on ITV Meridian, and the winner of the regional heats will be announced on Friday.